Pedretti Medal for Arts and Sciences

Ceremonial awarding of the “Pedretti Medal for Arts and Scences” of the New Rossana and Carlo Pedretti Foundation, held on 10 July 2021 at the Pietrasanta Visual Arts Center Foundation.

Honored to be part of the selection of 20 international artists of the Pedretti Medal for Arts and Scences, credited to the artist Ugo Levita.

The first Pedretti Medal for Arts and Scences was awarded to Prof. Evandro Agazzi, philosopher of science.

Having offered my small contribution, in honor of Carlo and Rossana Pedretti, creates in me an even more accentuated passion for the great master Leonardo Da Vinci. Because in the knowledge of the universality that Leonardo managed to create, first and foremost lies the passion. This magnificent Man still manages to strip us of our social levels, of our academic qualifications, of our figurative appearances, uniting us all with a single and authentic passion.

A heartfelt thanks goes to Margherita Melani and Sara Taglialagamba, two fantastic women who reside in the cockpit driving the great car that is the New Rosanna and Carlo Pedretti Foundation.

So I thank everyone and with special thanks to Svetlana Osipova for her kindness and efficiency.

Da Vinci Cvstos Temporis wants first of all to celebrate the passion that runs between this triad of people: Rossana, Carlo and Leonardo. All skilfully filtered and orchestrated by the New Rossana and Carlo Pedretti Foundation, projected into the future, but with great and robust foundations in the past.

My Pedretti Medal for Arts and Sciences, develops on a front, where the history of the medal is represented and celebrated and on a back, where we find the stylized initials as a seal of the medal itself.

Part of the front is thought in reverse, as was Leonardo’s flow of thought with respect to the mass, but also as it was proposed calligraphically. There are three opposing elements.

In evidence we can see the three great sword blades placed in union. These swords represent the values and beliefs that Rossana and Carlo had towards Leonardo and for these they have spent a whole life defending them with sword in the world. A number appears on each point of the sword, that number is there to strengthen this union between the three. In alphanumeric numbers we can see through their primary letters the names of each one. From above Leonardo on 10, on the right Rossana on 16, on the left Carlo on 3. Alphanumeric numbers designed following the Italian alphabet since all three were.

The points of the three swords give life to a continuous line of triangular shape. In a complete view between the triangle and the three swords, we can visually imagine a tetrahedron. That same Platonic tetrahedron that Leonardo drew as an illustrator for Fra Luca Pacioli in the De Divina Proportione. Tetrahedron representing fire = passion = triad, Leonardo, Rossana, Carlo.

In the three spaces created by the union of swords we find symbologies. Starting from the bottom, above the CVSTOS inscription, we see two birds. Those birds represent Rossana and Carlo. Rossana flies higher and Carlo lower in chivalrous form towards Rossana, but also as he has always defined himself ethically in the presence of Leonardo, calling himself a servant of him. Here we find the first element in reverse. Rossana, placed at the top left, is actually next to Carlo’s alphanumeric number, vice versa Carlo, placed at the bottom right, is next to Rossana’s alphanumeric number. The representation of the birds has a celestial breath for me, I represented these as two partridges.

Though partridges steal the eggs of one another, the baby birds hatched from those eggs, will always return to their true mothers.

Rossana and Carlo have now returned to their real mother who is Leonardo.

CVSTOS, with their determination, passion and love for the Master, Rossana and Carlo have been the custodians of Leonardo’s time and wisdom throughout their earthly life, defending his values, his beliefs and his works.

On the right side, next to the word TEMPORIS, we can observe a mix of symbols that flow into a single thought. We note a stylized detail of the altar of the Annunciation, between an architectural spiral and a botanical branch. In the center of the spiral we find an eye and in the lower part of the mix of symbols, a gear. All this means Leonardo and all his wisdom, which ranges from architecture, engineering, art and science. This mix of symbols is addressed in the TEMPORIS space as a testimony of the universal, infinite, timeless genius.

On the left of the medal we find a symbol that leads us directly to the New Rossana and Carlo Pedretti Foundation. This, placed in the space dedicated to DA VINCI, comes to validate and honor the dedication that this foundation carries out with passion and love in honor of the genius.

The alchemical enigma is a hidden detail that I wanted to bring back in my drawing, thus giving a small contribution to the great Master and to his secret and mysterious hidden vision.

The anamorphism present in Leonardo’s Annunciation testifies to how the master wanted to give his work a second perspective, different from the front one. With imagination I wanted to create something like this within my design, but in my case it is not an anamorphism, but an imaginary three-dimensionality.

If you look closely at the drawing, you will see that in the center of the spiral there is an inverted eye (this is the second element in reverse). Let’s now start thinking about this design in three dimensions. The eye above everything, disconnected from everything and placed in the foreground. Now let’s refer our thoughts to the movement of Leonardian writing from right to left, thus making the eye flow. We will come to observe the eye that is placed above the spherical center. At this point we flip the eye down and we will get an alchemical eye in the center of the tetrahedron.

DA VINCI CVSTOS TEMPORIS is the third element that we read counterclockwise in reverse.

At the end of the drawing we find a fence of Vincent’s knots, as it is for the back. 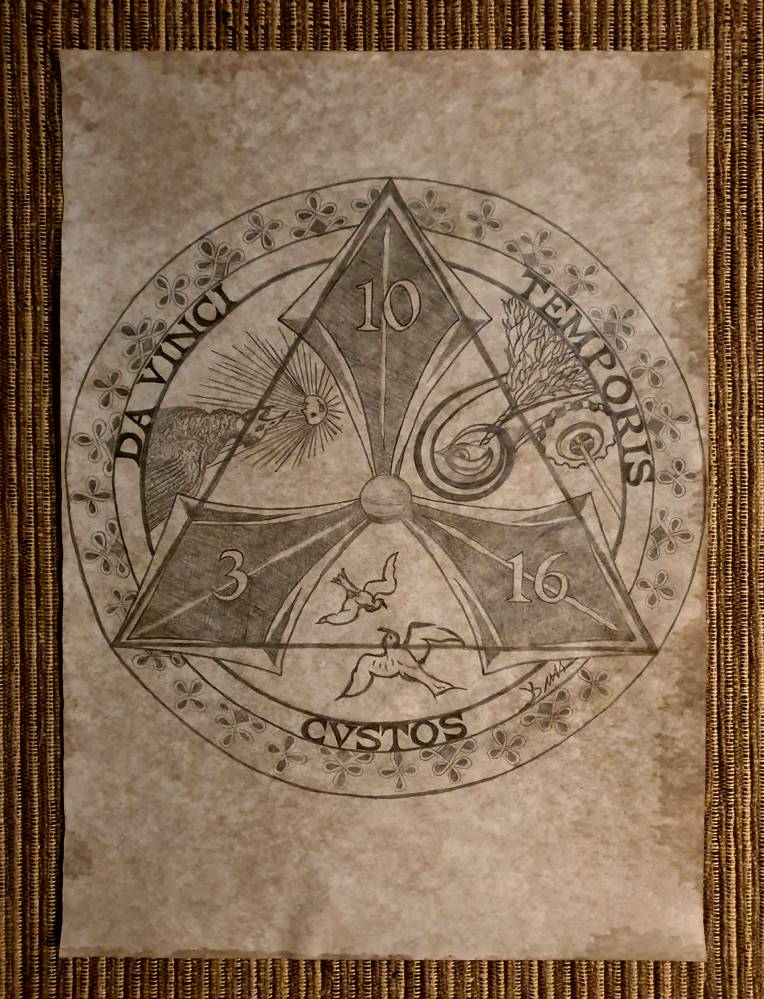 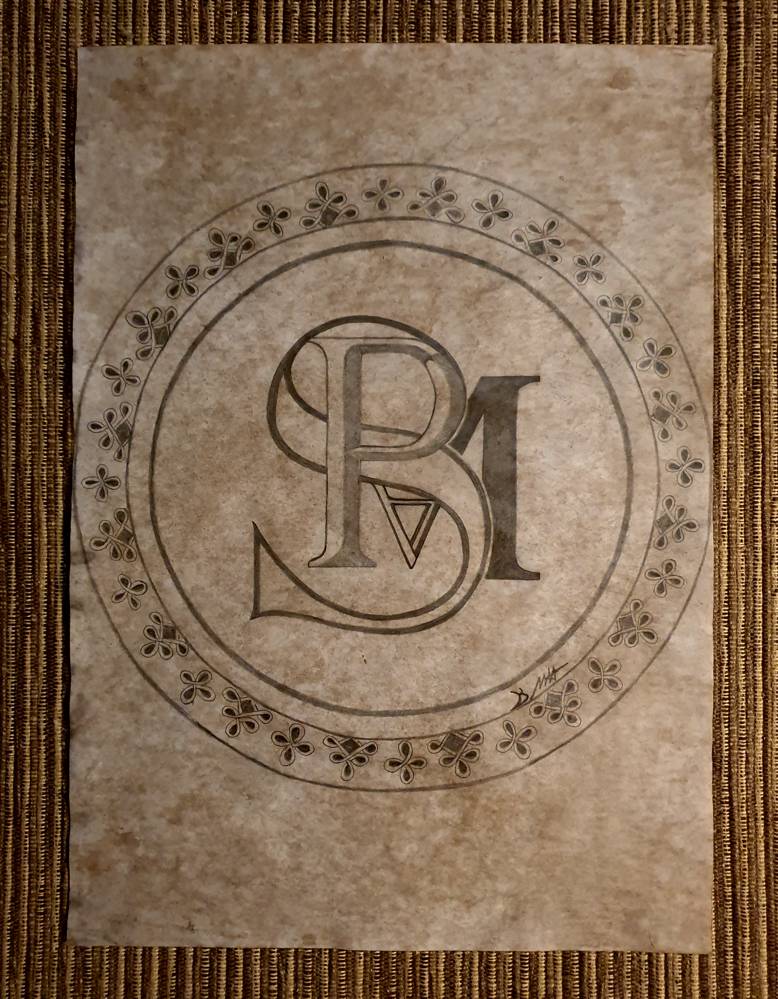 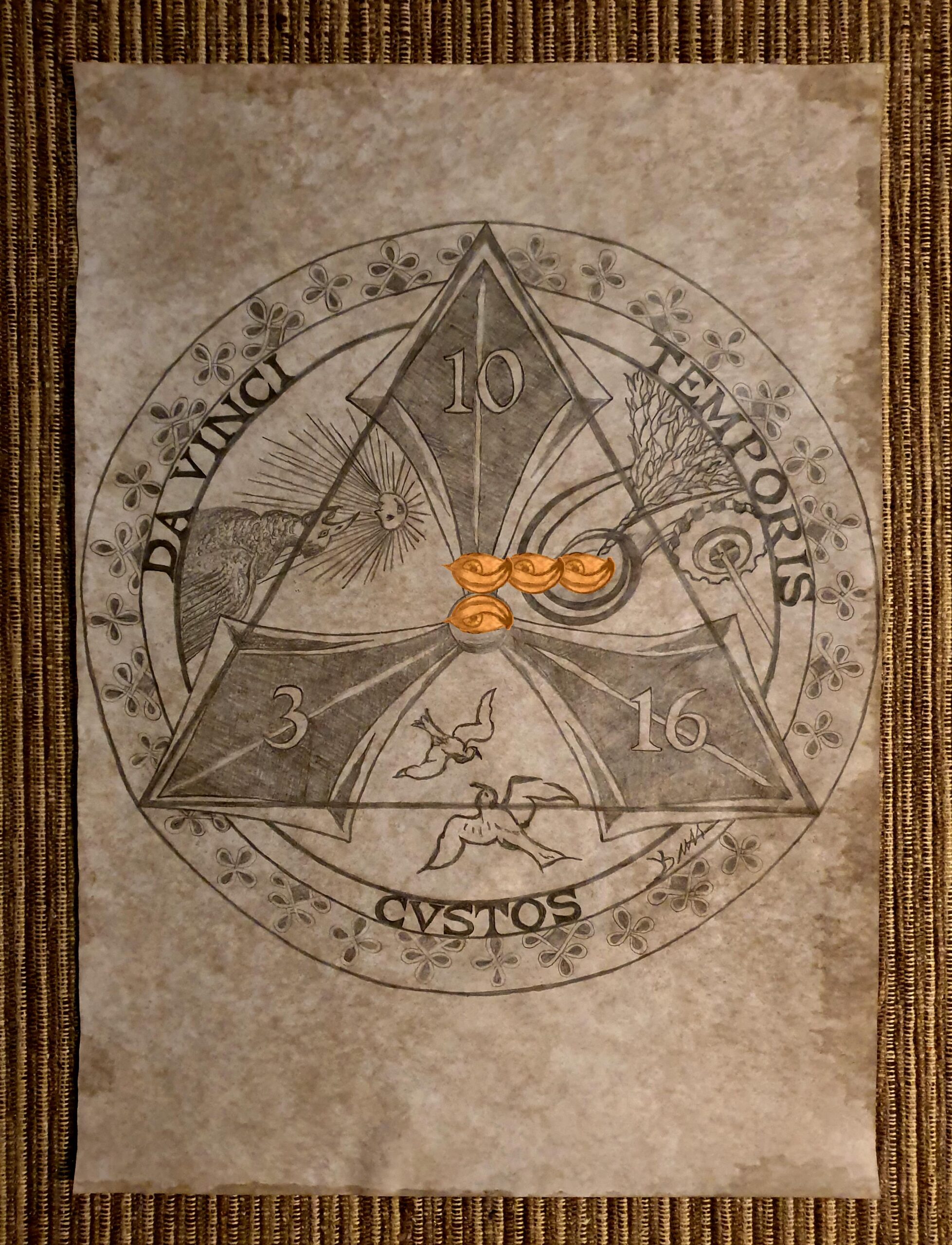 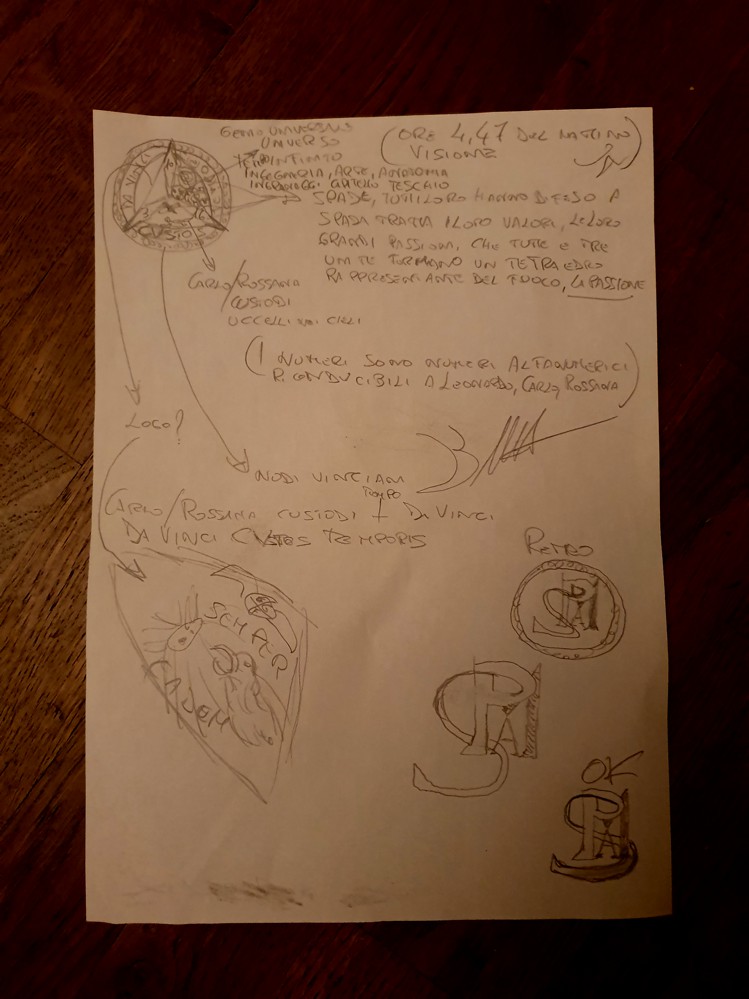 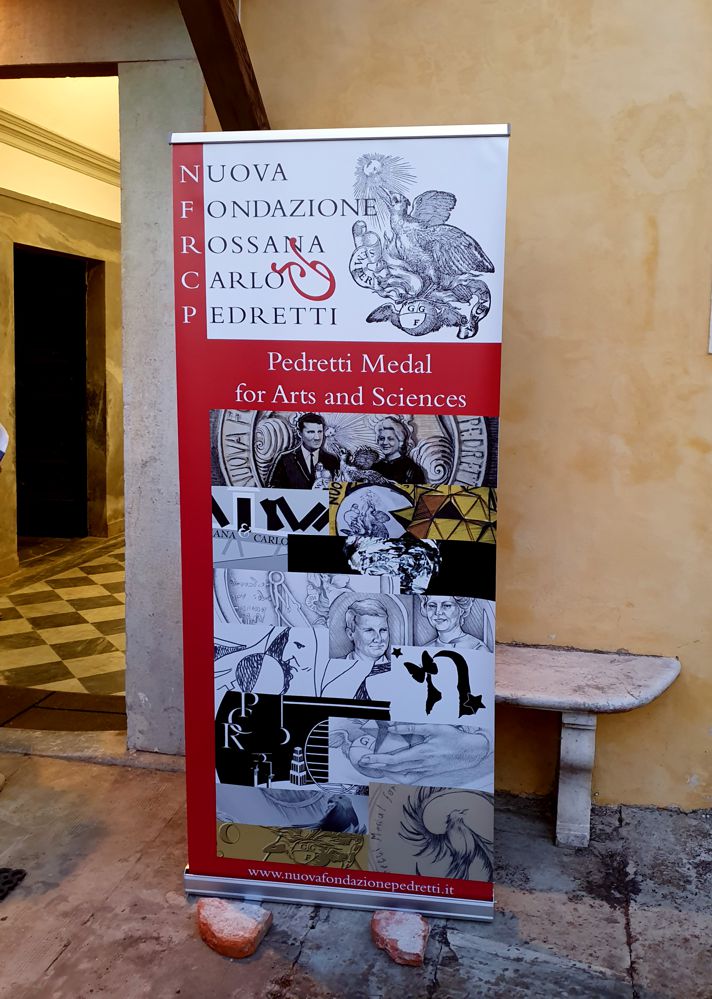 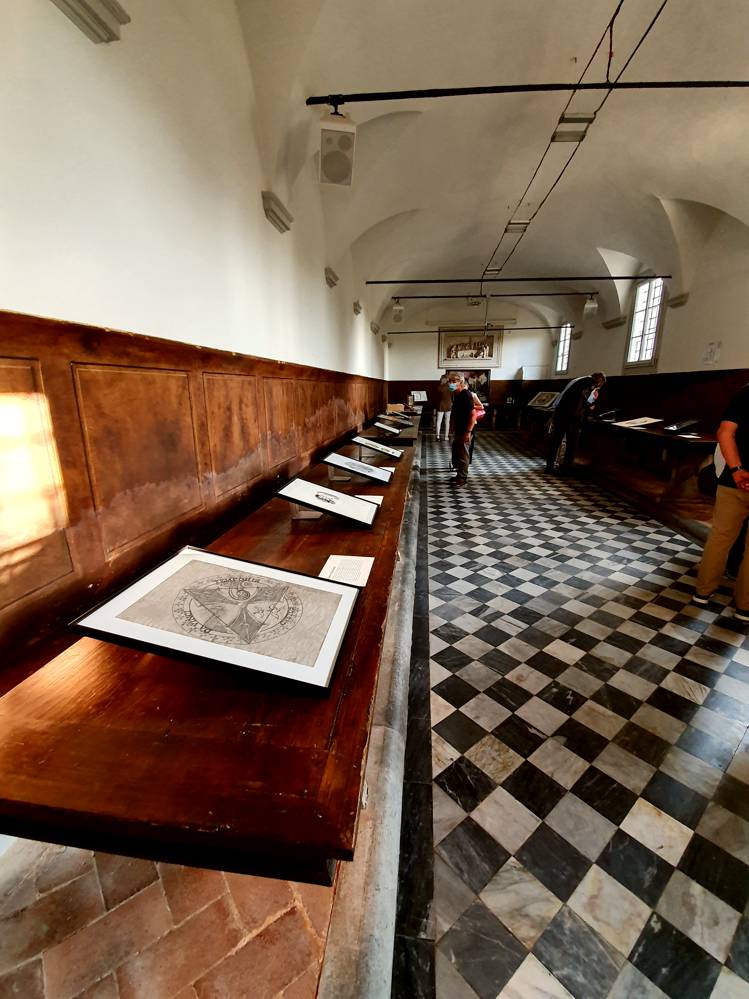 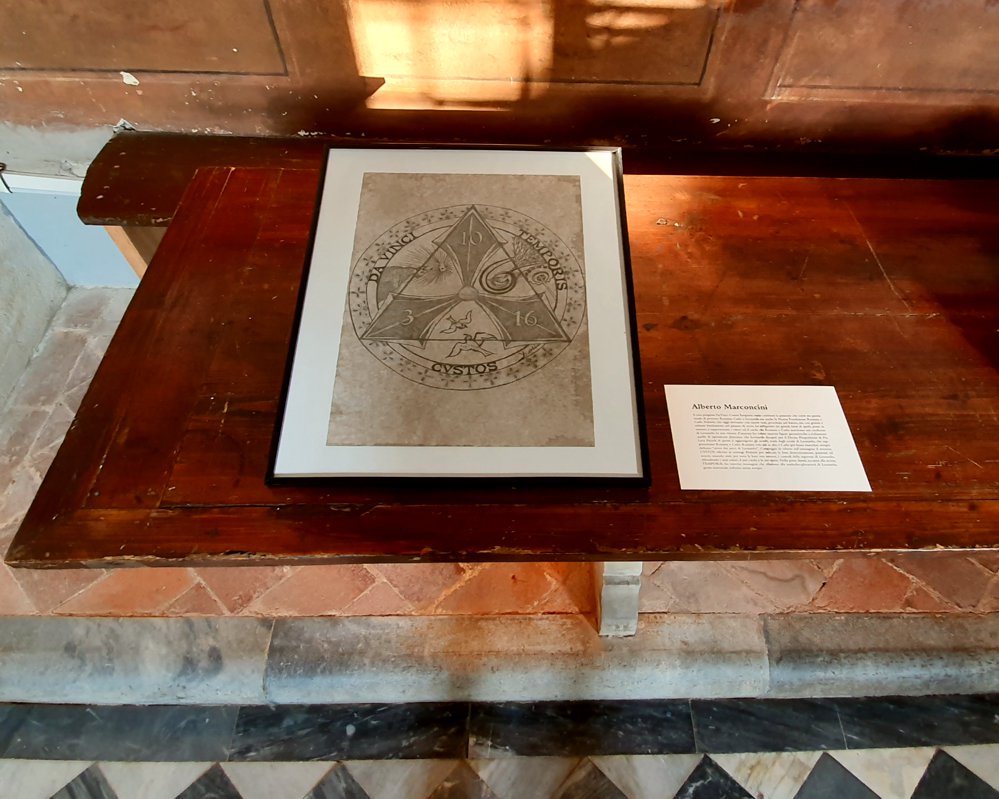 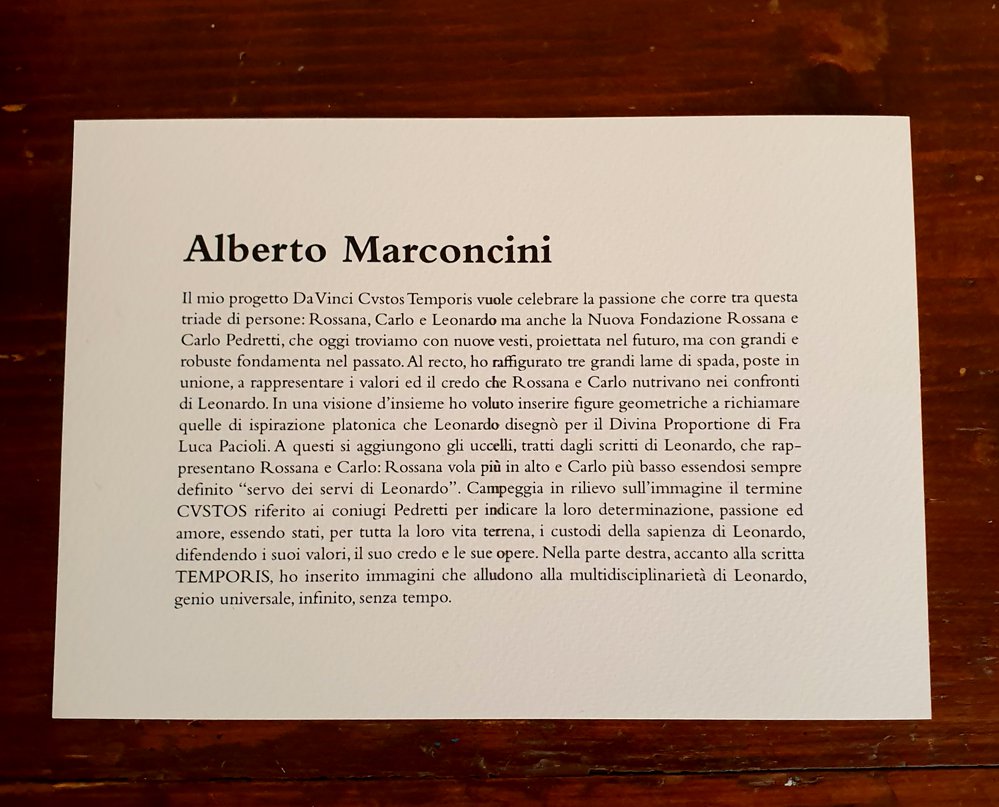 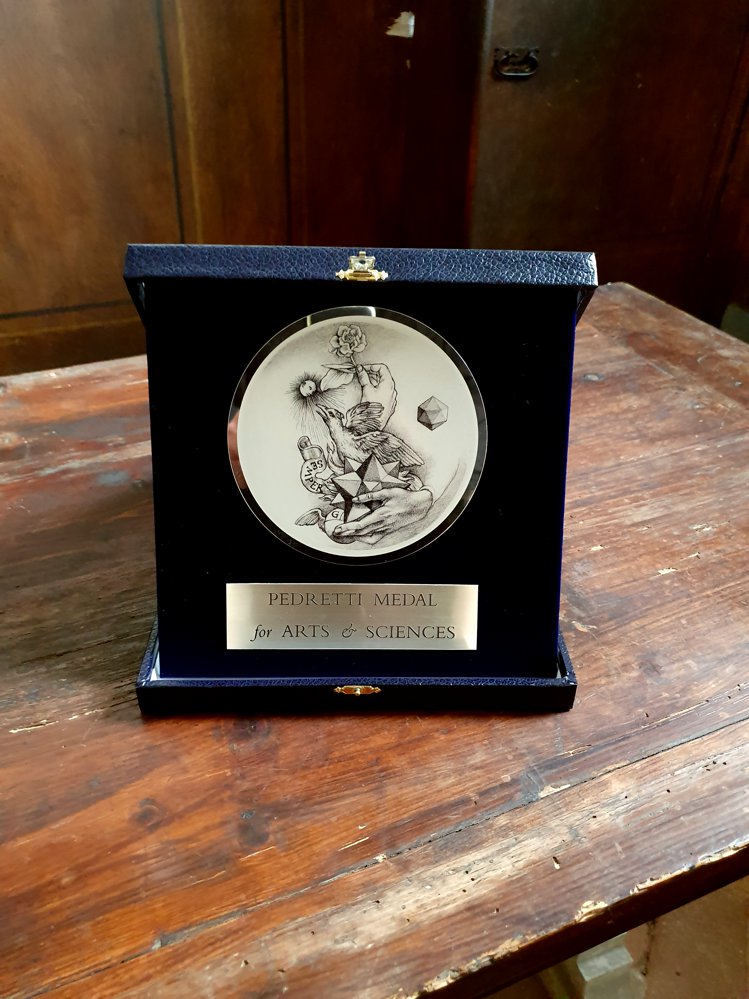 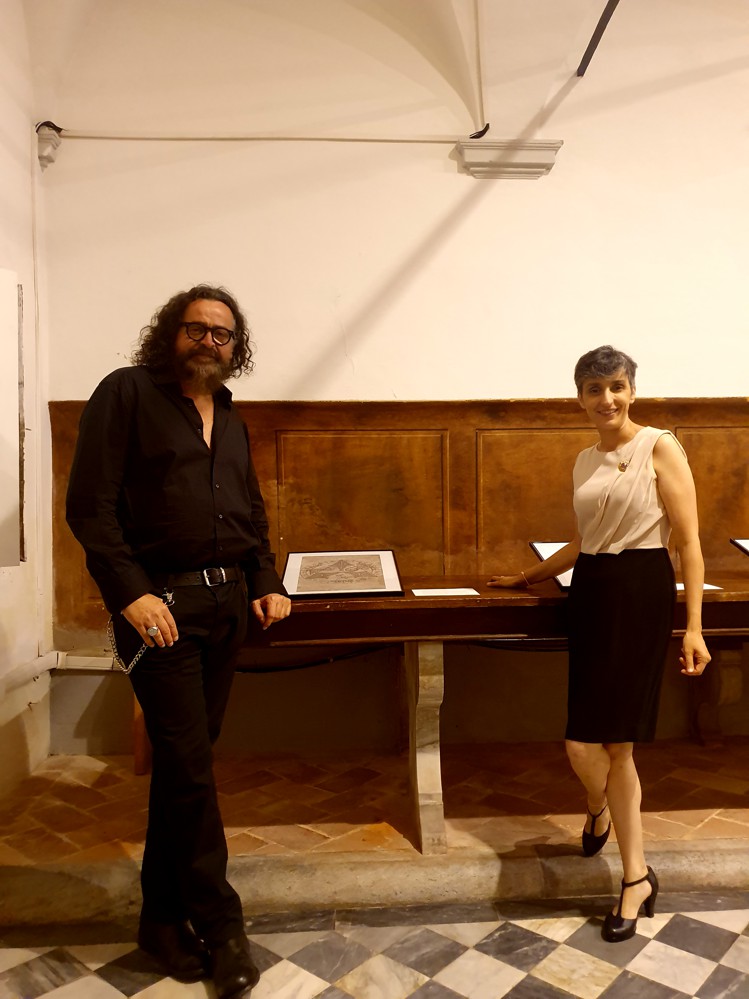 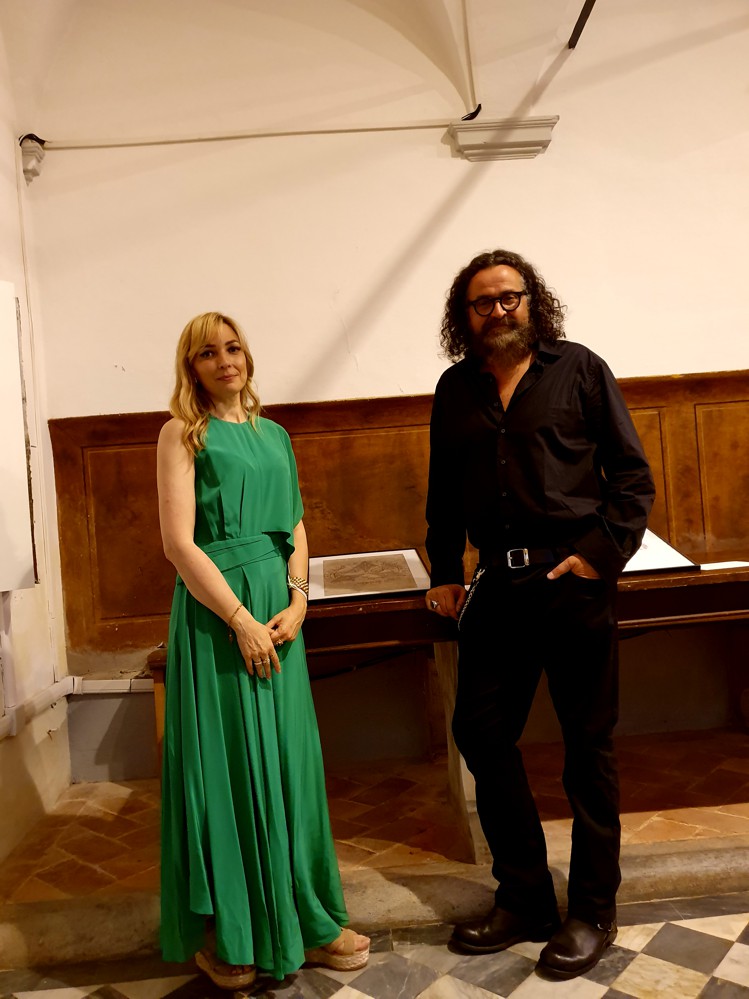 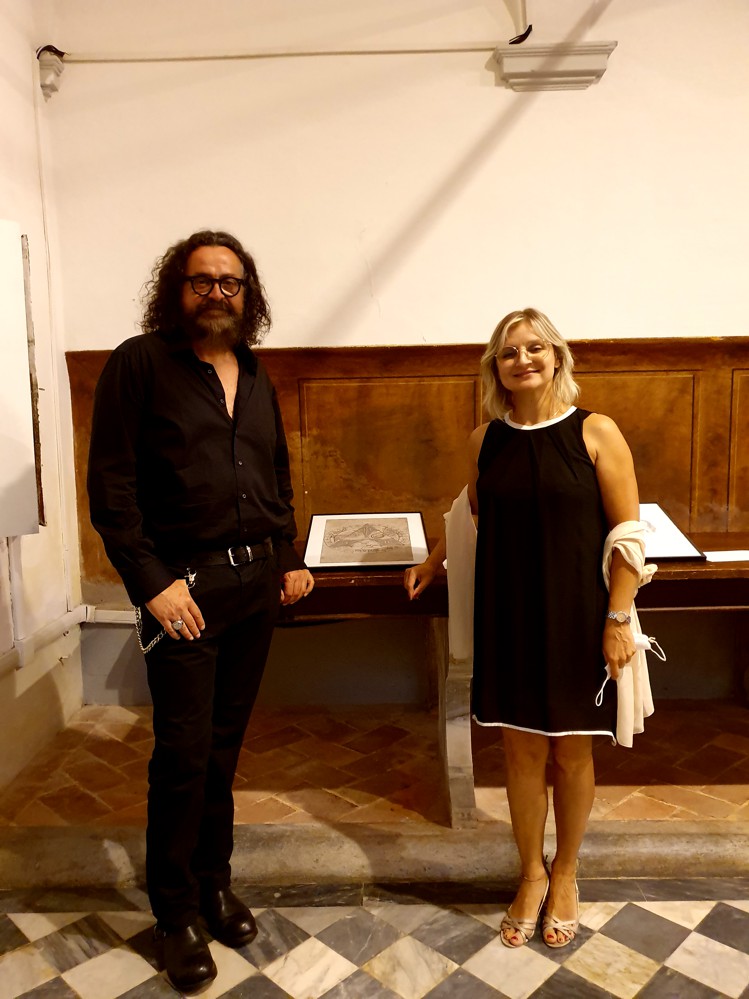 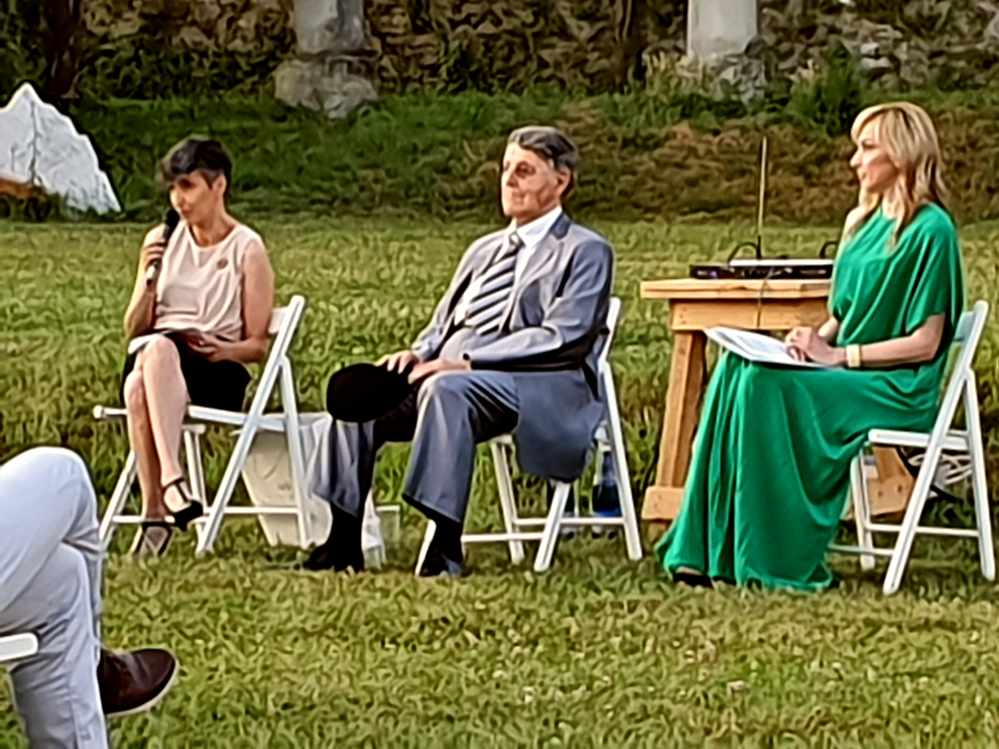 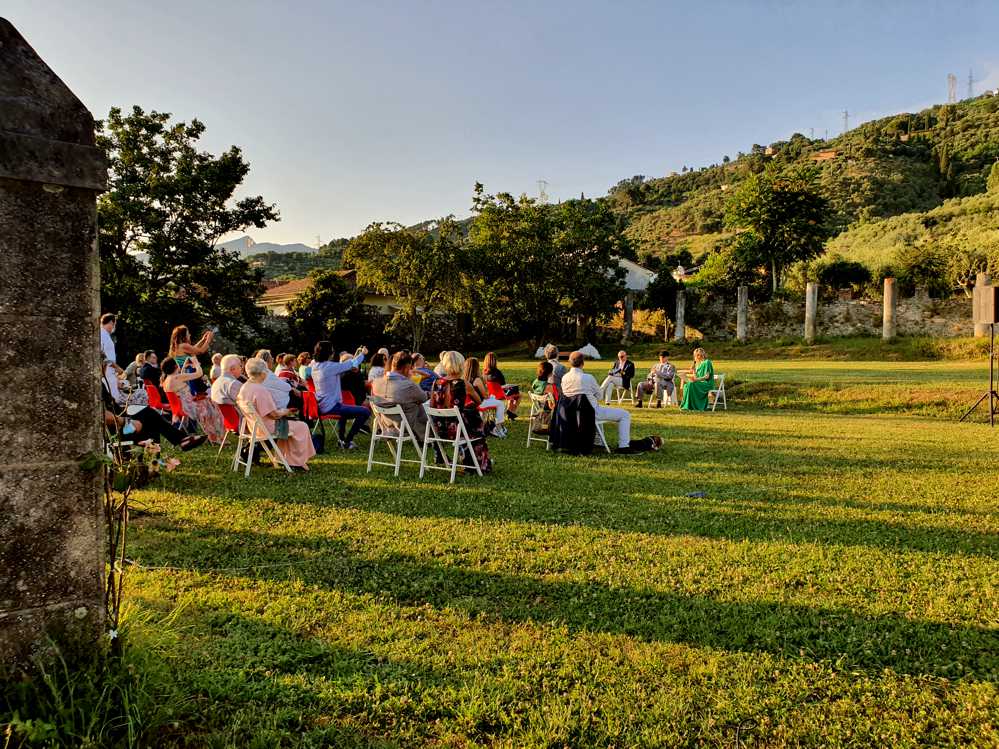 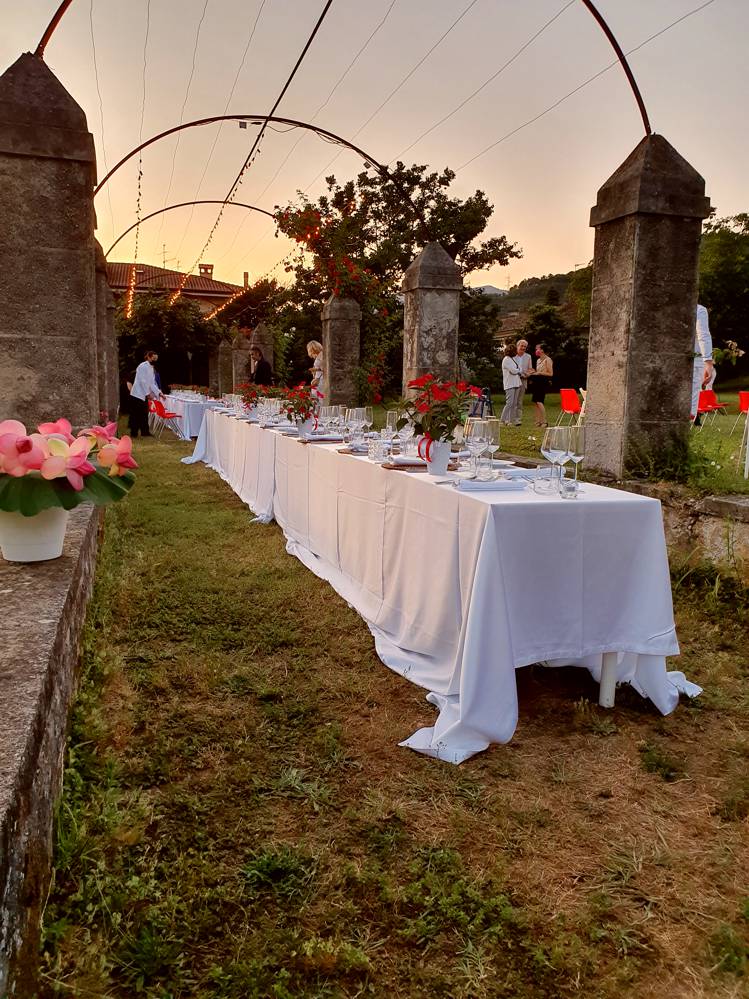 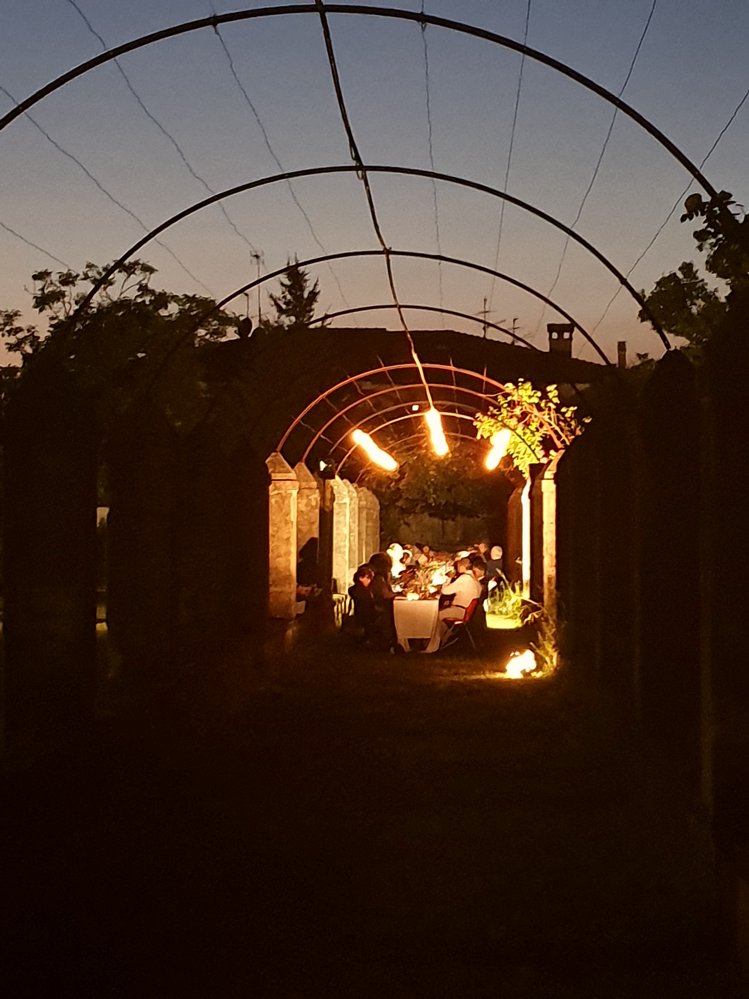